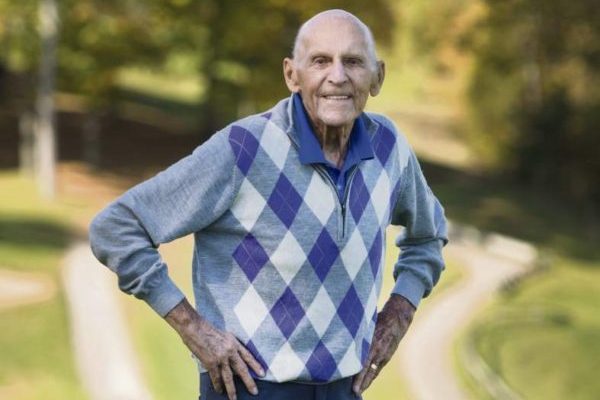 The radio broadcast for Pitt men’s basketball is honoring their former longtime color analyst for the entire season.

After more than four decades as part of the Panthers men’s basketball radio team, 88-year old Dick Groat was informed in March that he would not return to the broadcast this season. Groat’s longtime partner, play-by-play voice Bill Hillgrove is currently in his 51st season on-air with Pitt.

“It was a shock,” Groat said about being informed he would not return. “It hurt, but I’ve enjoyed every minute of college basketball. Pitt has treated me extremely well. But it did come as a complete shock to me.”

Without Groat this season, former Pitt guard Curtis Aiken, who played for the University from 1983-87, is now the broadcast’s sole color commentator.

According to Craig Meyer of the Pittsburgh Post-Gazette, Aiken came up with the idea to leave an empty chair on the sideline between him and Hillgrove. The seat has been unoccupied during the Panthers first seven home games and will remain that way for the rest of the season.

“It really wasn’t meant for other people in terms of their perception,” Aiken told Meyer. “It was really meant for Dick. I wanted him to know that I didn’t feel like I could replace him and this wasn’t about replacing him. With who he is and what he represents — I can’t fill that seat. I’m trying to do my own thing. I can’t replace Dick Groat.”

Aiken, a familiar name and familiar voice for the school has been featured as the broadcast’s third voice for the last decade. For the last two of Groat’s 40 years as a broadcaster, he only traveled to Duke, so most road games were called by Hillgrove and Aiken.

Groat was an All-American basketball player for Duke in the 1950s. In addition to his basketball accolades, Groat played professional baseball, mostly for the Pittsburgh Pirates, even winning the NL MVP in 1960.