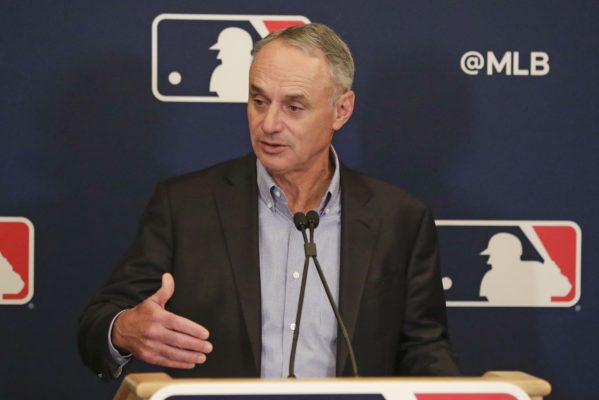 Last month, Pedro Martinez and Jessica Mendoza both criticized MLB pitcher Mike Fiers for his role in exposing the Houston Astros sign-stealing scandal. Speaking as media members, there is no issue with the opinion, but doubling as paid baseball team officials caused some concern, including from MLB Commissioner Rob Manfred.

Both Martinez and Mendoza were criticized for their comments as their dual roles were highlighted. Martinez works as an analyst for TBS and MLB Network, while also serving as a special assistant to the Boston Red Sox. Mendoza is both an ESPN employee and baseball operations adviser to the New York Mets. The Red Sox and Mets lost their managers this offseason because of the scandal and were mulling those decisions while Martinez and Mendoza spoke out against Fiers.

“Jessica was speaking as an ESPN analyst, not as a spokesperson for the Mets,” Mets general manager Brodie Van Wagenen said shortly after Mendoza’s comments about Fiers. “I have not had the opportunity to speak with her yet.”

According to The New York Post’s Ken Davidoff, Commissioner Rob Manfred discussed Martinez and Mendoza following the MLB Owners’ Meetings in Orlando, FL. Manfred said he had not spoken to either of them about their public opinions of Fiers.

“In what mode they were speaking, whether they were speaking as journalists or club employees, I think we were satisfied that their comments were being made in their role as journalists,” Manfred said. “And anybody that we have a relationship with, we don’t really try to control what they say in that role as media person. So the short answer is no, we do not reach out.”

But as far as whether or not Manfred is comfortable with people being able to speak as both journalists and MLB team officials, the commissioner leans on the side of not.

“Let me give you a short answer on that one: No. I’m not all that comfortable with it. I’m really not,” Manfred said according to Davidoff. “But it’s a topic that remains under discussion internally. As you know, it causes a lot of complications, not just on this particular incident or comments, but in general.”

According to Manfred’s comments, it seems like the commissioner would prefer for both Martinez and Mendoza to choose between working as a journalist or a team official.

“Having a rules expert ready to break down the minutiae of the game figures to be a big boost for games on TNT.” 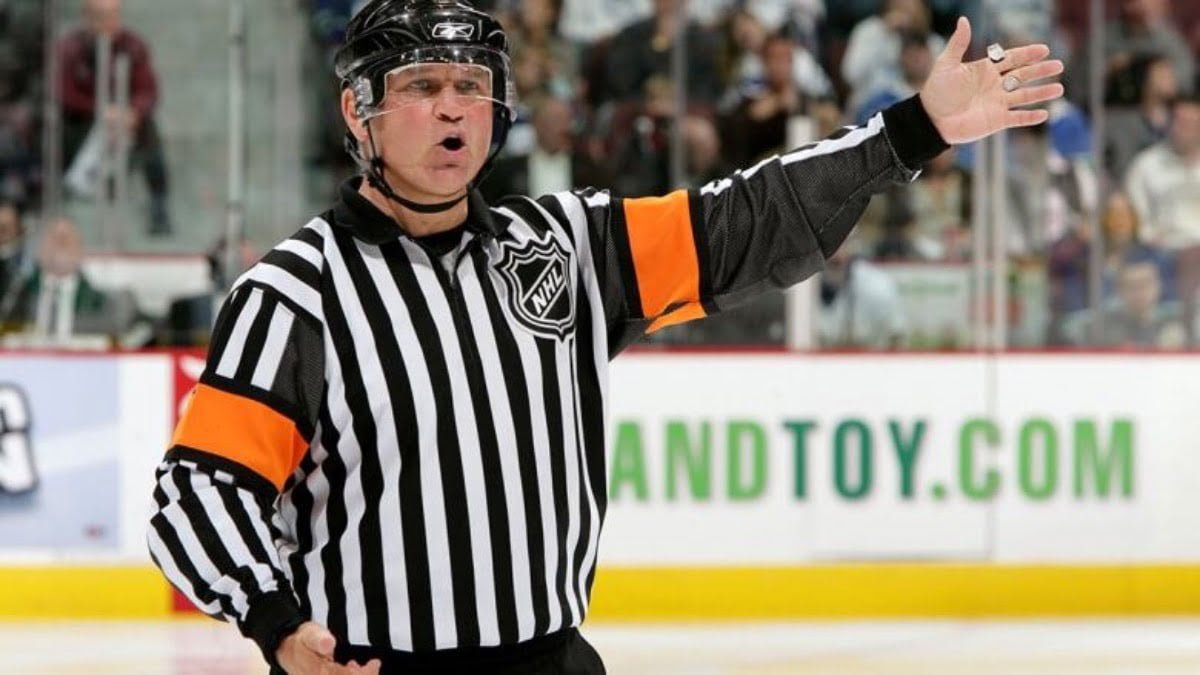 Fox has Mike Pereira and Dean Blandino, ESPN has John Parry, now, Turner is adding its own rules expert for its upcoming NHL coverage.

The network is bringing in Don Koharski to help analyze the game from a referee’s perspective starting with their first preseason broadcast on Sept. 30.

Koharski boasts three decades of NHL refereeing experience from 1977 to 2009. His resumé includes 1,882 regular-season games, 262 playoff games, and 11 Stanley Cup Finals. An intriguing move by Turner to nail down a rules and refereeing expert before the start of their NHL coverage.

The league and its new broadcast partners, ESPN and Turner, want to retain all of the hockey die-hards as they transition from NBC Sports, while also bringing new fans in along the way. Having a rules expert ready to break down the minutiae of the game figures to be a big boost for games on TNT.

Koharski discussed his career following his retirement from the game in 2009 and had glowing thoughts to unveil about one of his new Turner teammates.

“Guys [like Wayne Gretzky] in the ’80s were getting hooked, held, grabbed, tackled, and were still able to do what they did so well,” Koharski said to Metro. “Nowadays, there is no more tackling or hooking or holding. It’s dramatically different.”

“Wayne Gretzky was a freak in our sport,” Koharski said. “Everybody else was a superstar.”

Koharski got started in hockey refereeing as a hobby in the 1970s at Shannon Park Arena in Halifax, Nova Scotia. That spark of interest has led him on quite a journey in the 40 years since. 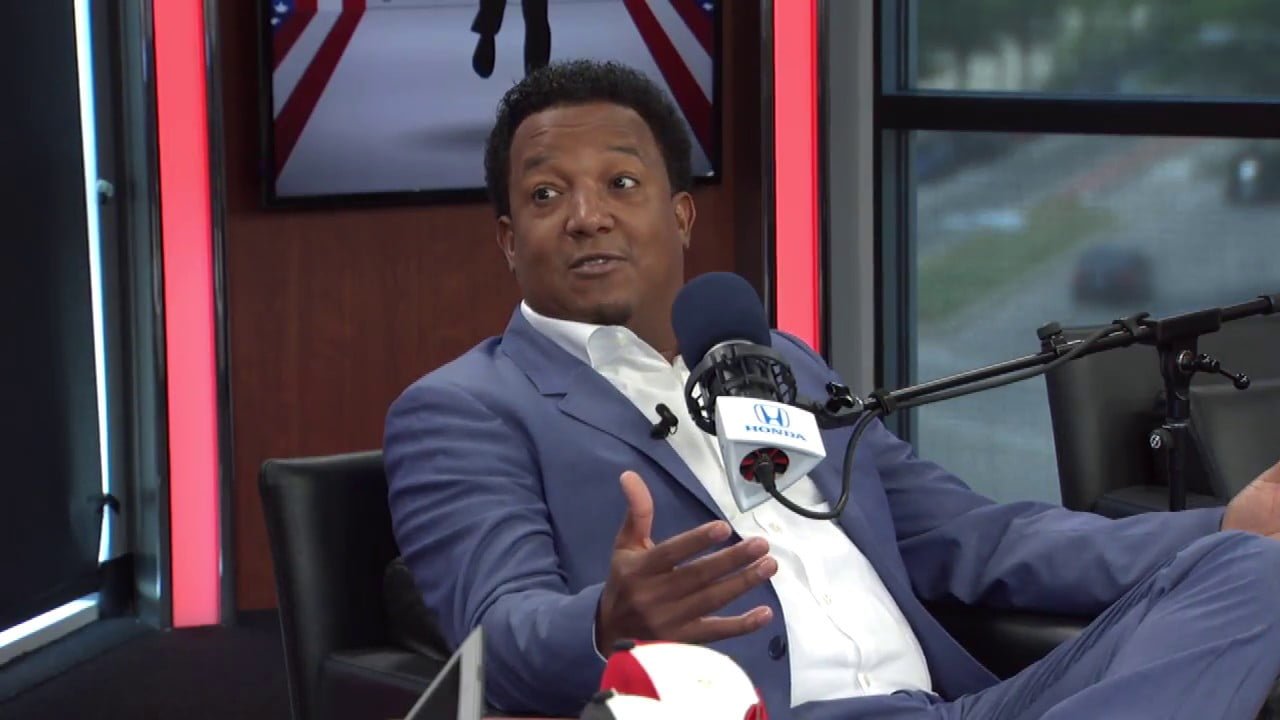 Pedro Martinez pitched with a flare at the MLB level, and he’s brought that flare, for better or worse, to his MLB Network analyst role. Martinez and the rest of the MLB Tonight crew did a live look-in during the San Francisco Giants and Arizona Diamondbacks game on Tuesday night when Martinez couldn’t hold back his frustration with the umpire.

D-Backs pitcher Luke Weaver had the bases loaded, and his delivery wasn’t sitting right with Martinez or fellow analyst Harold Reynolds. The pair thought Weaver was committing uncalled balks. A balk is when a player refuses to pause their pitching motion after they set up on the mound. Every runner advances one base when an umpire calls a balk.

Ramirez and Reynolds were about ready to jump through the monitor and officiate the contest themselves.

Martinez responded, “But the umpire does not understand the kind of movement he’s making.”

“So, we meet with umpires before the season starts,” said host Greg Amsinger. “And they talk to all the broadcasters. We bring this up every year, and what we hear from the umpiring side of the argument is, as long as the motion is consistent for that pitcher – he doesn’t alter it – if it’s consistent with base runners on, then it’s not a balk.”

Reynolds retorted, “He is consistently balking.”

“He’s never been called for a balk in his career,” replied Amsinger.

“I think we’re on a delay,” said Amsinger.

The broadcast was not on any type of delay.

“I’m sorry, I apologize about that. What can I say?”

“Nothing, nothing else,” Reynolds responded. “This is gonna be good. We’re only on for three more hours.”

Watch a clip of the hot mic exchange above.

“McMenamin first started at ESPN in 2009, where he was the Lakers beat writer during their championship runs with Kobe Bryant and Pau Gasol.” 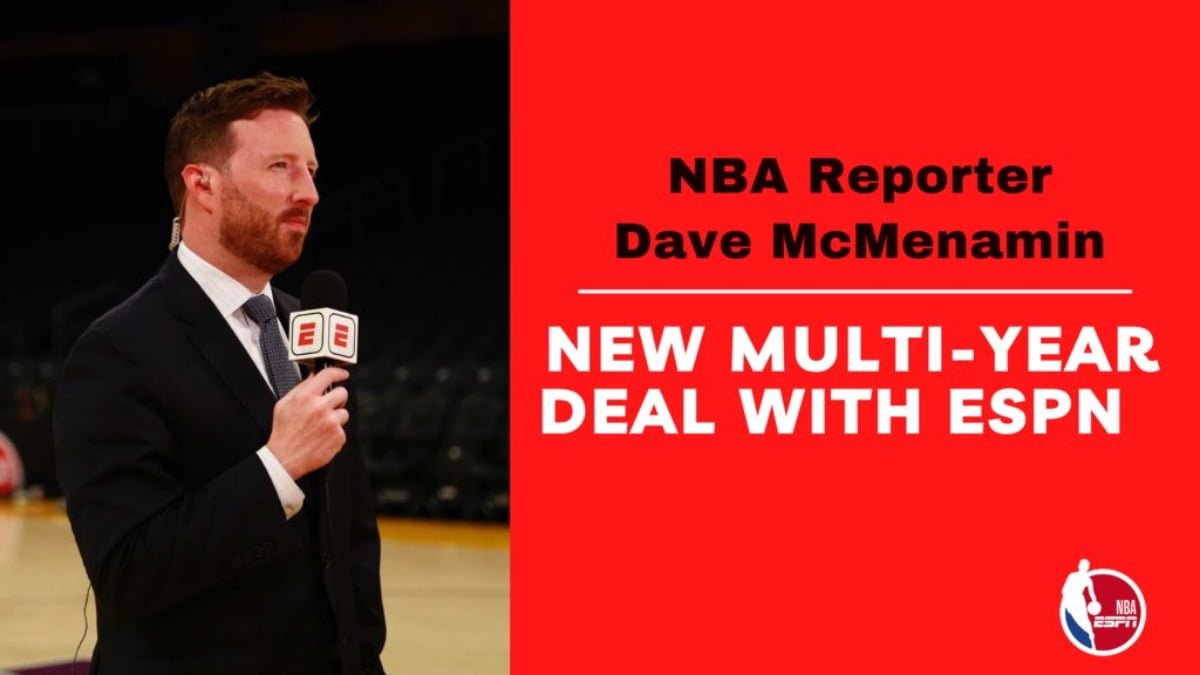 ESPN has signed NBA reporter Dave McMenamin to a new multi-year extension. McMenamin is currently focusing his coverage on the Los Angeles Lakers for the second time in his ESPN career.

The Syracuse grad began working in media at NBA.com in 2005.

McMenamin first started at ESPN in 2009, where he was the Lakers beat writer during their championship runs with Kobe Bryant and Pau Gasol. The reporter lived through those ups and the subsequent downs in La La Land before leaving the Laker beat to cover LeBron James and the Cleveland Cavaliers when the superstar returned home in 2014.

McMenamin was there every step of the way as the 2016 NBA Champion Cavaliers brought Cleveland its first team sports title in 50 years. The scribe even expanded his coverage to a full book. McMenamin and his Cleveland colleague, Brian Windhorst, co-wrote Return of the King: LeBron James, the Cleveland Cavaliers and the Greatest Comeback in NBA History.

The book appeared on the New York Times bestseller’s list upon its release and cemented McMenamin as a trusted go-to voice for all things LeBron James. McMenamin returned to his Lakers coverage nearly ten years after his first day on ESPN when James announced he was leaving Cleveland to play in Tinseltown.

McMenamin is no stranger to post-ups and free throws himself, having played basketball at the University of Limerick in Ireland before attending Syracuse. It’s truly full circle with this Lakers roster and McMenamin.

The odds-on favorites to win the Western Conference have the oldest average age of any NBA team in the league. A certain 37-year old forward isn’t bringing that mark down. The Lakers added Carmelo Anthony to their squad this season, 18 years after Anthony led Syracuse to a national title. Syracuse student manager Dave McMenamin watched Anthony, and his teammates celebrate that accomplishment from the bench.