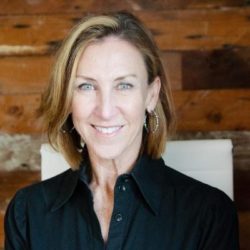 As the founder and President of Direct Results, Jill Albert has had to make a number of adjustments to support her staff during the pandemic while remaining a valued partner to advertisers and the radio stations they place their business on. On this episode of Managing The Crisis, Jill discusses why she believes strongly in endorsements, how ratings factor into the buying process, which categories have been busiest during the pandemic, why she remains bullish on the future growth of podcasting, and when she thinks the advertising business will start to recover.

So, You Want To Be In Sports Media

Broadcast Partnerships Can’t Get In The Way Of Reporting

“The practice of broadcast partners not contradicting information directly from the team has been going on for years.” Morning sports anchors count on alarm clocks and, 99 times out of 100, that no sports news actually happens during a typical shift.  Recap yesterday’s action, find 3 or 4 ways to say that Team X edged Team Y in overtime or some facsimile of that.

The two and a half weeks of Olympics every couple of years could change things for morning sports anchors.  Tuesday morning’s bombshell with US Olympic gymnastics champion Simone Biles was just the exception that proves many broadcasting rules.  Rightsholders have been beholden to the teams they are in business with, so the narrative is dictated by the team and not the network.

At 7 am eastern time on Tuesday, July 27th, I was anchoring morning sports when I saw on Twitter that Biles was pulling out of the overall team event.  Immediately, I went to NBC, the rightsholder for the Games, to see what the story was.  The Today Show was just starting.  Meanwhile, Peacock was airing the event live.

USA gymnastics immediately issued a statement that NBC followed diligently.  They said that Biles “has withdrawn from the team final competition due to a medical issue.”  Meanwhile, Peacock was interviewing Biles’ coach who said accurately that Biles had withdrawn due to a mental health situation.

Twitter jumped on the report that it was a mental health issue. Still, NBC was sticking to the medical issue. And they did what any rightsholder would do.

Could NBC have paid closer attention to their sister broadcast on Peacock?  Perhaps, but anyone who has worked on a high-stakes broadcast knows that control rooms and anchors focus on their own product. Also, if any official outlet of the Olympics gives them data, why wouldn’t they believe it.

I spoke off the record to two members of NFL broadcast crews. Both said, that if a star on a team left the game and the team gave the announcers an official statement, even if that statement is false, they wouldn’t contradict it on air. “Team X has just given us this information,” is how they would often phrase it.

Before NBC was corrected, they covered the story as if Biles had suffered some physical injury. They even spoke to Biles’ former teammates Laurie Hernandez, who was commentating for NBC, and Aly Raisman, who joined via Zoom.

My role for iHeartMedia that morning was to do sports reports in Georgia, Virginia, Alabama, and a national report.  I usually feed my casts in the morning and head on my way. When the Biles news broke, I needed to get the facts right.  Many news outlets were reporting (accurately) what Peacock had revealed.  Good Morning America accurately reported on the story.

The difference between ABC and NBC is the billions that NBC pays for the rights.  The real question is, what is NBC paying for?

The practice of broadcast partners not contradicting information directly from the team has been going on for years. It is probably why there are so many attempts at hiding information.

Over my 27 year career, there have been plenty of occasions where an athlete couldn’t play for a personal reason. In one instance I saw a player find out his wife was cheating on him. Another situation was a player was dealing with a sick parent.  In both cases, the team issued statements with some vague injury.  The team statement has a lot of weight with the media, but to the rightsholder, it might as well be etched in stone.

That instinct to cover up is particularly disturbing. The coach had told the live Peacock broadcast the simple truth – that Biles was not mentally up to competing after she faulted on her previous attempt.

Perhaps the initial statement was not a cover-up, but rather a miscommunication.  That simply cannot happen at this level.

The idea of a media cover-up has been used too often because institutions believe that they cannot sully the brand with less than positive information.  Memories of Penn State University and THE Ohio State University, come to mind. What is the mindset to cover up anything negative, whether it’s as big as an assault or as small as skipping a game or match?  The truth always comes out.

This brings up Simone Biles. She does not owe the public an explanation, and her mental health is more important than any competition.

However, if the media scrutiny bothers her, it helps me understand those other players in wanting their truths to be hidden. Her withdrawal is a complicated issue, and while some of the takes I’ve heard this week have been outright disgusting, others have been rather profound.

The toxicity that surrounds social media in 2021 is perhaps unavoidable.  It’s just sad that this debate got so ugly when the Olympics are designed to unite.

The Tokyo Olympics have been tough to watch already, because of the time zone issues.  Losing star power like Simone Biles and Naomi Osaka has made it even harder.

It’s only the first full week. 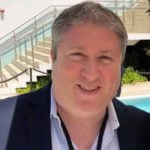 Seth Everett is a columnist for BSM, and accomplished sports broadcaster with over 25 years of experience in the media. He currently works for iHeartMedia and hosts 3 podcasts that combined have over 100,000 listeners weekly. Previously, he has worked for ESPN, FOX Sports Radio, NBC Sports Radio, Sirius/XM, FOX Sports, MLB.com, and Bloomberg TV, as well as WFAN, 98.7 ESPN NY, KJR, WIP and 950 The Fan. Seth also lends his professional expertise to Syracuse University as an adjunct professor. He can be found on Twitter @Seth_Everett.

“I asked 30 established stars in the sports media world to join me in determining who is next.” 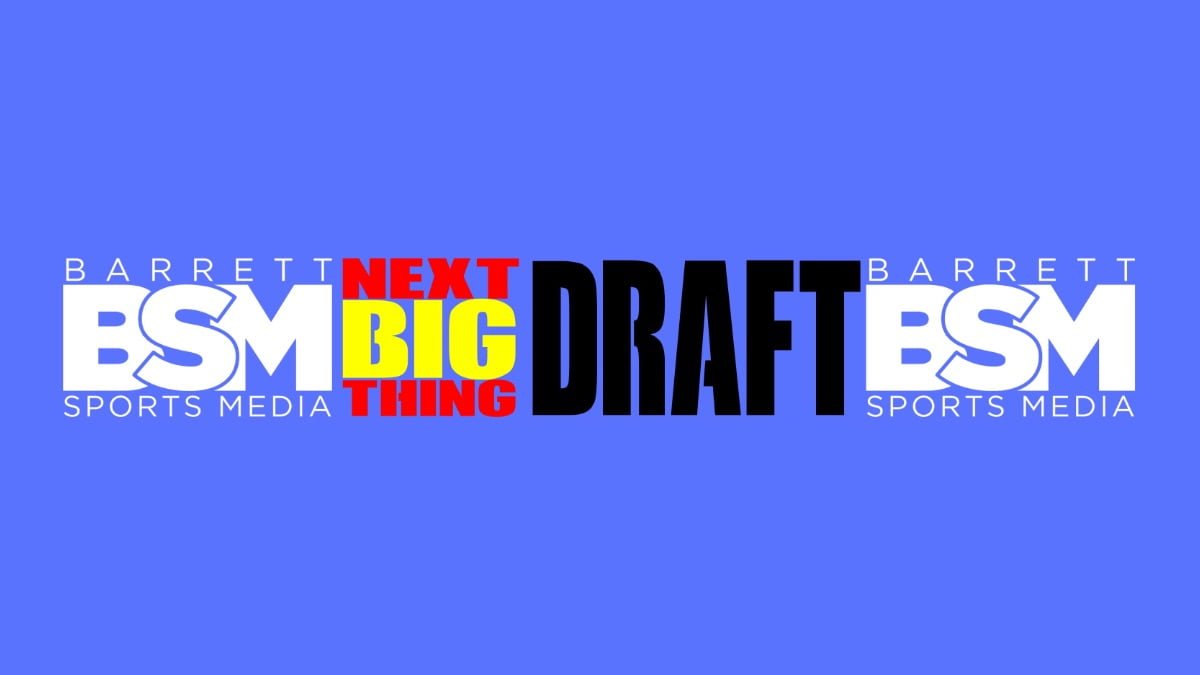 There was a time when draft night, no matter the sport, meant that we were gathering the sports media for a similar exercise here at Barrett Sports Media. Between the pandemic, a changing focus, and more work than we could have anticipated when this business was launched, that tradition fell unfortunately by the wayside.

Today though, I am bringing it back. I asked 30 established stars in the sports media world to join me in determining who is next. This is the Barrett Sports Media Next Big Thing Draft. Just like the NBA, we have an age limit. The difference is theirs is at the low end and ours is at the high end.

We have long discussed the 40s being the decade where most people in this business are established and make the bulk of their money. So, I set 40 as the top end.

Now, sure, there are plenty of names under 40 that are already established stars. They are fair game. They are already their networks’ franchise players. They can be the same for the theoretical teams we are forming.

So, in order of their picks (which were drawn at random), here are the TV, radio, and digital stars that agreed to be a part of the draft.

This took a lot of time and effort to put together, but we got it done. Here is how the draft went.

Here are a few observations from the 2021 Next Big Thing Draft.

THE FUTURE IS FEMALE – The first three picks were all women. Half of the top ten were women. Whether it is TV or podcasting, some of the brightest up and coming stars in our industry are women and that is a good thing.

BRAND LOYALTY – It probably shouldn’t be a surprise, but look at how many people chose up-and-coming stars at their own networks. Is that about job security and being a company man? Maybe, but look at Paul Finebaum choosing Laura Rutledge or Kirk Herbstreit choosing Pat McAfee or even Stugotz choosing Billy Gill. These people get to see their choices face to face with some regularity. I think it speaks to being able to recognize talent when you see it.

DAMON BRUCE KNOWS THE GAME – Bruce asked me to call him so he could make his pick over the phone. He wanted it to be clear. It was a crime that Shams Charania and his 1.2 million social media followers were still on the board at number eleven. “I want everyone to know how much they f***ed things up,” he told me.

A BIG IMPRESSION – I loved the story Jason Smith told me about why he took the versatile Morosi with the 18th pick. “When he comes on my show he likes to use Italian phrases (you know, him being Italian and all), so one time I challenged him that some time in the next week he had to do a media interview entirely in Italian and not explain why he was speaking Italian to the hosts. And he had to post it. Three days later he puts the interview on Twitter, and @’s me on it: It was a baseball interview he did with a TV station…wait for it…wait for it…in Italy. 3,000 miles and an early call time to win a dare. Well played, Jon-Paul.”

THE FREE AGENT MARKET – These people all went undrafted: Jason Bennetti, Big Cat, Domonique Foxworth, Mike Golic Jr, Cassidy Hubbarth, Mina Kimes, Joel Klatt, Katie Nolan, Danny Parkins, PFT Commenter, Brady Quinn, Taylor Rooks, Marcus Spears, and Joy Taylor. Some network or digital platform could build a hell of a roster with this draft’s leftovers. You could really see this playing out with the final picks. “I had 4 or 5 can’t miss picks that are already off the board,” Jason Fitz told me before he proceeded to waffle between three potential candidates for the 27th pick. 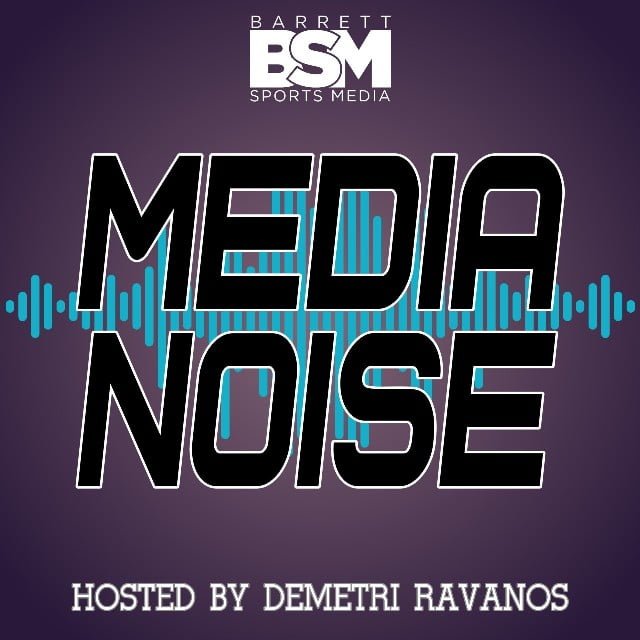 Demetri Ravanos is back to look at an interesting week in the sports media. He welcomes Seth Everett and Brian Noe to a show that touches on women in sports media, the Big 12’s impending demise, the way NBC covered Simone Biles, and where tape delay stands in 2021.