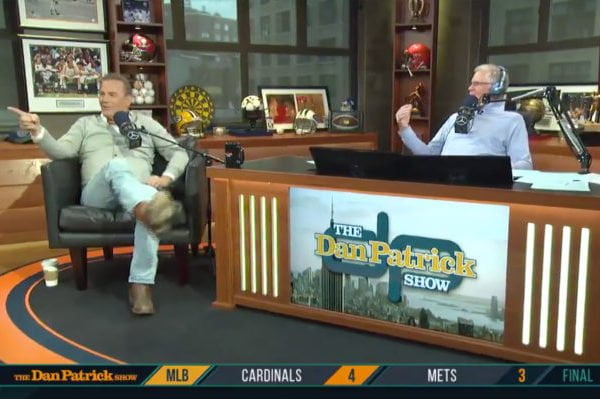 Peacock is serious about sports programming. Just one day after announcing the simulcast of the Rich Eisen Show would debut there in October, NBC has nabbed another TV/radio simulcast for its streaming platform.

Bobby Burack of Outkick reports that the video simulcast of The Dan Patrick Show will also move to Peacock. Right now it is exclusive to the show’s YouTube channel.

The simulcast of The Dan Patrick Show has been on the move several times in recent years. The show broke ground for radio/TV simulcasts in 2009 when the show was first televised by DirecTV on what was then known as The 101 and later became The Audience Network. That relationship continued until earlier this year when it was announced that the Audience Network would go away in favor of a preview channel for AT&T’s new streaming service HBO Max.

The television version of the Dan Patrick Show isn’t new to NBC either. NBCSN carried it from 2012-2019. Other TV networks that have been in business with the radio show include the AT&T and FOX regional sports networks.

Burack’s report did not note a start date for Peacock’s relationship with DP. The Rich Eisen Show debuts on the platform on October 5. Eisen’s show airs on Dan Patrick’s SiriusXM satellite radio channel, which makes it a possibility both shows debut on the same day.

The network has signed more than a dozen hosts and anchors to new deals in 2021.

The more things change, the more they stay the same at ESPN, and they made that known in a Tweet from their PR account on Friday morning. The company has been in critic’s crosshairs for letting talent go, all while (justifiably) paying over $12 million annually to Stephen A. Smith.

The Maria Taylor contract negotiation put these issues front and center when reports leaked that she was looking for “Stephen A. money” to renew her deal. The network couldn’t agree on a fresh contract with Taylor, who has already made her debut with new employer NBC. Taylor joins Kenny Mayne and Ariel Helwani as high profile exits from Bristol in 2021, but ESPN has signed 15 on-air talents and counting in 2021 and wanted to make sure people don’t forget it.

“ESPN has re-signed or hired more than a dozen television anchors & hosts so far in 2021,” the Twitter post from ESPN PR read.

Reading between the lines a bit, it is interesting that the PR team chose to single out “anchors and hosts” in these featured hires. According to Andrew Marchand, those roles typically generate lower salaries at the top of the industry than TV opinion-makers bring in.

Finebaum is the only member of this 15 person group that is spouting his opinions every day on ESPN platforms. Outside of a few opinion opportunities here or there, the rest of this group keeps some of ESPN’s biggest properties on the right track through unbiased hosting.

It could be much ado about nothing like the Aaron Rodgers “drama” this offseason, but it sure seems like a targeted post by ESPN. Critics have lobbed napalm their way, yet the network has the receipts and talent to fire back in force.

Kenny Mayne Says He Will Launch A Podcast

The former-ESPN personality appeared on the debut episode of “Podsauce.” 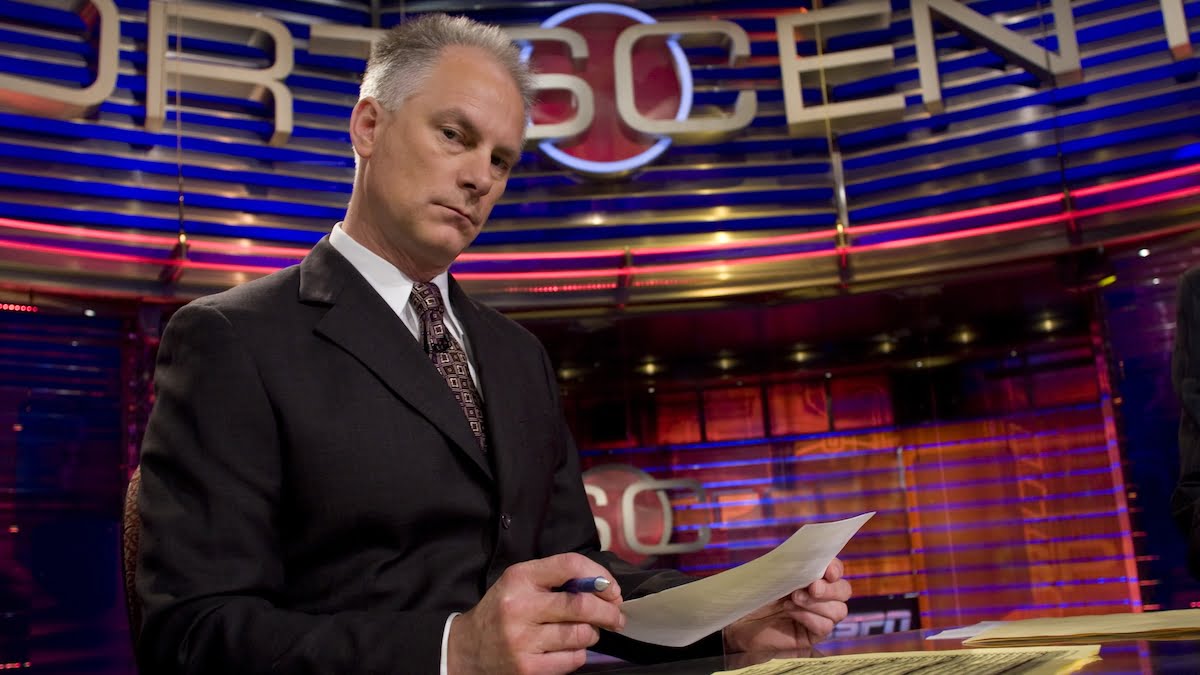 Kenny Mayne has kept busy since ending his tenure at ESPN earlier this year. He is hosting Olympic coverage on NBC Platforms and has produced some homemade content on Instagram. The former SportsCenter anchor appeared on the debut episode of Podsauce this week and discussed pitching Michael Jordan on a commercial and much more.

Podsauce is a show about podcasts hosted by Alesha Reneé and Dax Colt. The duo interviews different guests about their lives and picks their brains on what podcasts they recommend out of the three million-plus currently in circulation.

After confirming he is formulating a podcast idea, Mayne caught the hosts up on some other content ideas.

“We’re doing a podcast,” Mayne said. “My hope is my first guest is Stevie Wonder. That’s what I’m gunning for.”

Jordan has also been at the top of mind for Mayne since he exited ESPN.

“The first thing I tried to do was I pitched Michael Jordan a commercial idea,” Mayne described. “They ended up saying no but it was kind of a thrill. Couple days of being in the game, right? Like they could’ve said yes, they could’ve said maybe. That wasn’t for him that’s fine, I had it based on the whole crying Jordan meme.”

Mayne also noted he is enjoying the fruits of his labor a bit as he transitions to the next project. This is one of the longest times he’s been able to spend at home since starting his career. Check out the full episode below.

The Sports Illustrated writer is one of two USA Swimming parents able to watch their child compete in-person at the Tokyo Olympics. 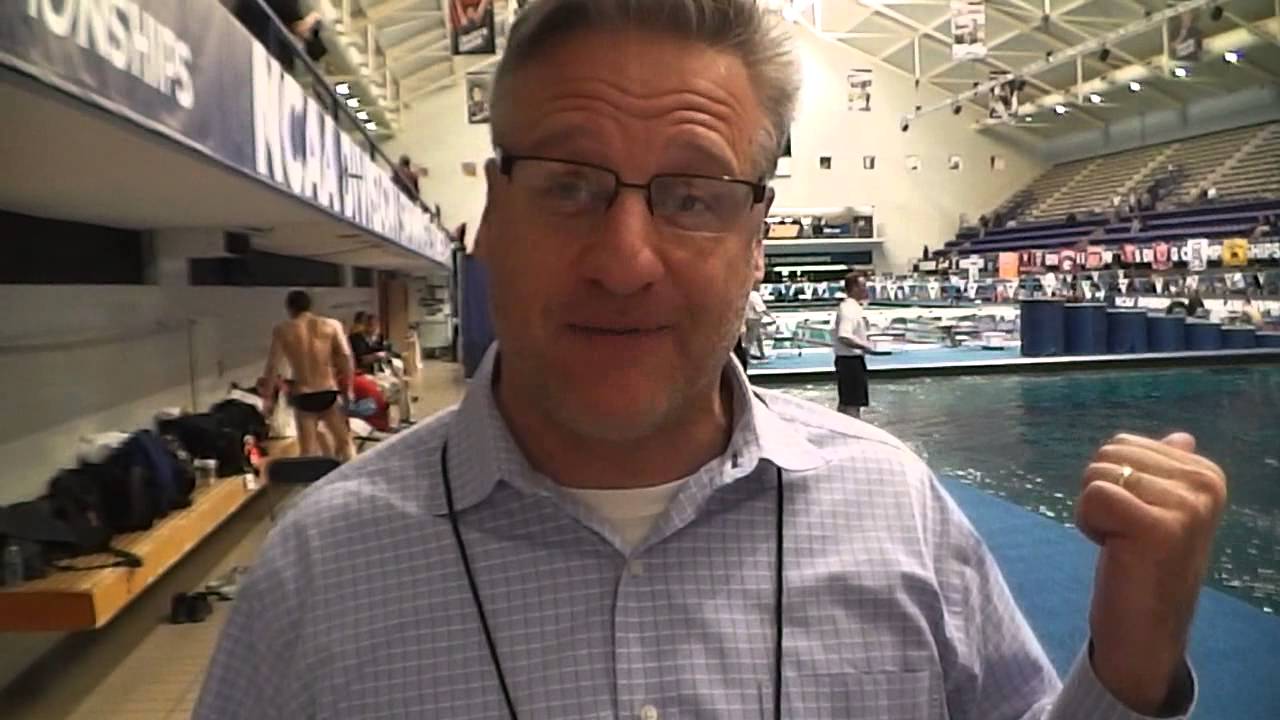 Pat Forde got to experience a proud moment as a father last night in person, and his job is the biggest reason why. The Sports Illustrated writer is in Tokyo covering the Olympics, at the same games his daughter is competing in.

Brooke Forde is a part of the USA Swimming contingent in Tokyo and captured some hardware Wednesday night as her 4 x 200 meter freestyle relay team won the silver medal. Brooke swam in the qualifying heat, but was replaced for the final. She still received a medal as part of the team. Pat is the only member of the Forde family allowed to watch Brooke in person because of the fan restrictions put in place for the games.

Every member of the Forde family besides Pat is watching the action here in the States. He discussed what the experience is like with The Sporting News last week:

“I feel incredibly lucky,” Forde said in the interview, “but there also is a little bit of something akin to survivor’s guilt. It’s like: Why am I the one that gets to go? Especially, my wife, Tricia, she was a swimmer. She really got the kids in the pool first, and she was also the one that got up at 4:05 a.m. and made breakfast for them far more often than I did, and took them to 5 a.m. practice more often than I did. She put a lot of sweat equity into this, and she can’t go. And I feel really badly for her.”

Tricia Forde and most of the family cheered on their Olympic swimmer from Louisville, Kentucky. The special achievement didn’t go unnoticed by some of the biggest names in sports media.